Zurich said its new EV offering and other finance and insurance products could be used for “nearly all manufacturers,” including Tesla, Rivian and Polestar.

But Tesla, Rivian and Polestar vehicles weren’t eligible. The language also didn’t reflect an electrified powertrain — it referenced an engine and excluded a battery.

“Internal combustion engine VSC language states the battery is excluded from coverage, which is the intent for a vehicle with an ICE, as the battery is considered to be a maintenance item,” Zurich spokeswoman Robyn Ziegler wrote in an email. “In an electric vehicle VSC, the language does not exclude the battery because the battery is key to a vehicle’s operation.”

The EV-specific contract also will provide roadside assistance coverage for vehicles that have run out of juice, though Ziegler said the insurer made this aid available under the traditional product. Roadside personnel provide a charge to dead EVs or tow them to a nearby charging station. According to Marie Knight, Zurich North America vice president and head of strategic services for direct markets and programs, the company has anticipated EV demand and secured the necessary charging equipment.

Zurich found the remainder of its F&I product portfolio would work for EVs without modification to their terms or cost. However, Zurich did make one adjustment in adding Rivian, Tesla and Polestar to the list of makes eligible for coverage, according to Ziegler. (For example, a Tesla previously couldn’t obtain Zurich wheel-and-tire coverage; now it can.)

Ingham said Zurich also will continue to monitor its exposure on its key replacement product.

“The keys for some of these vehicles are different,” she said.

An important EV question involves the cost of ownership, a variable that could be reflected in Zurich’s vehicle protection product pricing.

Ingham said the cost of the EV service contract will vary by make, but dealerships shouldn’t expect a “drastic difference” between that and a traditional service contract. Nor should they expect the EV product to be cost-prohibitive to a sale, she said.

“It’s not significant,” she said.

The cost of ownership might ultimately emerge relatively similar to that of an internal combustion vehicle, Ingham said, with lower maintenance bills offset by a higher cost of repairs. For example, EV-certified technicians command a higher hourly labor rate than those working on internal combustion engine vehicles, and EV repairs tend to involve additional labor hours.

“Indications currently are that there will be considerable cost associated with the ownership and repair … especially as these vehicles start to age a bit,” Knight said.

Knight was confident F&I product demand among EV buyers would yield similar sales penetration rates to those found with internal combustion vehicles. Penetration might even exceed those levels, she said.

“There is that unknown factor,” Knight said. This sentiment might particularly arise among first-time EV buyers, she said.

Airline stocks could suffer if 'return to business travel gets pushed back’ amid pandemic: Analyst

Fri Dec 3 , 2021
Raymond James Managing Director Savanthi Syth joins Yahoo Finance Live to discuss airline stocks and concerns about the Omicron variant. Video Transcript ZACK GUZMAN: Welcome back to Yahoo Finance Live. Of course, we have been watching how the market’s been reacting to the latest updates on the omicron variant here, […] 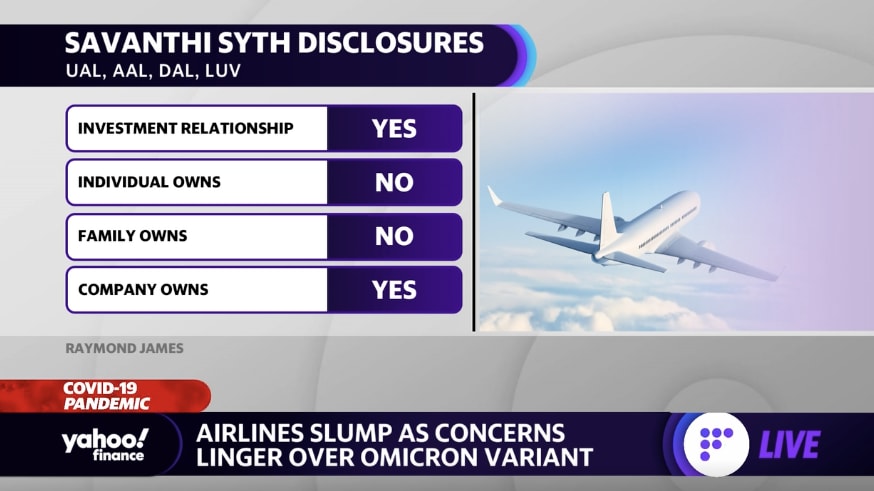