It’s not just raw materials, transportation and labor expenses that are rising. Retailers are also facing climbing digital ad costs. The challenge is: Will it be worth the extra money?

Last year — and especially over the holiday season — social media platforms like Facebook were highly effective in reaching consumers stuck at home, aimlessly scrolling on their smartphones. But this year, between Apple’s privacy changes and the ongoing controversy over Facebook’s practices, more and more consumers are steering clear of Facebook’s apps, which include Instagram and WhatsApp. Or they’re turning to new ones, like TikTok.

The shift has brands worried that an online marketing blitz won’t reach the right customers. Some even fret that they could alienate consumers by being on certain social media sites.

“When Covid happened, it affected everybody differently, but for many brands it created a really serious tailwind,” said Brian Berger, founder and CEO of the direct-to-consumer menswear brand Mack Weldon. “For this nine-month period of time [in 2020], all of us were back to the glory days of really being able to exploit … being in the right place at the right time.”

I can’t overstate how critical it is for brands to really have this direct one-to-one relationship with the customers by interacting and transacting with them on their own websites.

There was a flight by major advertisers at the onset of the pandemic last March out of channels like Facebook, he said. Companies, including hotels and airlines, were either trying to conserve cash during an uncertain time or hoping to avoid striking the wrong tone with their ads during a health crisis. The companies that continued to market products were able to score top advertising real estate online for a lot less money. But this dynamic came to an abrupt halt earlier this year.

“Then 2021 starts and vaccines start to roll out, people start to get more comfortable and life starts to become more normal again,” Berger said. “And we were right back to where it was 2019, overnight. Rates are back up. Competition is back up.”

The finishing blow came when Apple in April made privacy changes impacting how apps can track users. Many consumers have since opted out of tracking by popular apps, which means businesses are gathering less information on users’ daily habits and interests. As a result, it becomes much more difficult for advertisers to target people on the internet effectively.

Poshmark, an online marketplace for secondhand goods, said Wednesday that it’s having to overhaul its marketing strategy due to Apple’s privacy policy. The company said it’s directing dollars toward TV advertisements and influencers to try to acquire new customers. Its shares closed down nearly 29% on Wednesday, having touched an all-time intraday low of $16.08, after its outlook for the holiday period came in below analysts’ estimates.

“When Apple rolled out their new changes and operating system … overnight it really shook the entire digital marketing space, including Facebook,” said John Merris, CEO of Solo Brands, in an interview. “I can’t overstate how critical it is for brands to really have this direct one-to-one relationship with the customers by interacting and transacting with them on their own websites.”

Merris said a number of retailers are increasingly concerned about how the changes make it difficult to tailor ads to shoppers.

“Every day it seems like the ad tech space or the digital marketing space is changing,” said Merris, who runs a company that owns outdoor-inspired products like Solo Stove, Chubbies and Oru Kayak. “And you’re hearing a lot of consumer brands extremely concerned, or are already seeing huge challenges at acquiring new customers online because of those changes.”

Meta, previously Facebook, is in the meantime facing widespread scrutiny after a whistleblower, Frances Haugen, a former product manager, released a trove of damning internal documents. Among other things, the documents shed light on Facebook’s handling of hate speech and how it impacts users’ mental health. It’s led at least one retailer to reconsider its presence on the social media platform.

Sporting goods company Patagonia, known for taking bold stances on social issues, said in a Twitter post on Oct. 28 that it continues to boycott Facebook after pulling all of its paid advertising from the company last June.

“This decision has affected our business & the environmental [nonprofit organizations] that we support — whose campaigns benefit from the social media amplification that we fund and execute,” Patagonia said. “But we have learned to adapt. We are smarter in how we grow our community as a result of this advertising ban.”

The company didn’t explain further exactly how it has adapted. Representatives for Facebook and Patagonia didn’t immediately respond to a request for comment.

A Patagonia store is among the several shops catering to outdoor enthusiasts in Telluride, Colorado.

According to Polly Wong, president of the full-service marketing strategy firm Belardi Wong, the troubles at Facebook became an even bigger headache for direct-to-consumer brands compared with traditional retailers. That’s because many of them got their start thanks to creative Facebook ads that directed customers to their websites, rather than relying on swaths of stores.

“There’s no question that the vast majority of DTC [direct-to-consumer] brands build their business on Facebook, with Google being second,” Wong said. “But right now, more than half of our clients are seeing Facebook underperform.”

An analysis by the market research company eMarketer found that users in the U.S. are expected to spend less time scrolling through Facebook this year and in the coming years. Time spent on the platform for adults over the age of 18 is expected to be down 3.3% in 2021 compared with 2020 levels, eMarketer said. It forecasts it will drop another 1.8% from 2021 to 2022, and fall another 0.7% in 2023.

CPMs, a marketing term used to denote the price of 1,000 advertisement impressions, are skyrocketing, Wong said. Over the summer months, Belardi Wong was tracking 50% increases to CPMs on Facebook, she said. And the company is projecting CPMs could go up another 50% on top of that this holiday season.

More retail brands are testing out direct mail catalogs, podcasts and large-scale television campaigns to diversify their marketing mix, Wong said. Brands are also trying to leverage celebrity endorsements. And these can end up being less expensive alternatives in this environment, she said.

Activewear brand Vuori is looking to stores as a marketing channel. It’s planning to open about 100 in the United States over the next five years, after receiving a $400 million investment from SoftBank’s venture capital fund. Brands like Allbirds and eyeglasses maker Warby Parker are similarly plotting to ramp up their store growth.

“When you first launch [a brand], it might be cheaper to acquire a customer via social advertising or via paid search,” Vuori founder and CEO Joe Kudla said. “But then when you’ve acquired your millionth customer, it actually might be much more cost effective … through a store.”

But part of the shift away from digital advertising may be transitory. Snap has suggested this is the case. The social media company told analysts during a conference call at the end of October that some retailers are pulling back on marketing on Snapchat because they need to temporarily curtail costs or because they don’t have enough goods to sell.

“We’ve heard from advertising partners across a wide variety of industries and geographies that they are facing headwinds in their business related to disruptions in global supply chains as well as labor shortages and increasing costs,” said Snap Chief Business Officer Jeremi Gorman. “We expect that some of these clients may opt to slow their marketing spend.”

Chocolate manufacturer Hershey and consumer products giant Kimberly-Clark both cut spending in the third quarter and cited supply chain issues, as two examples. The companies are facing higher commodity costs and, in some instances, haven’t had enough products to meet demand.

Other retailers are tweaking the messaging in their ads to reflect their inventory positions. Berger said Mack Weldon has been adding “ready to ship” messages to its marketing materials ahead of the holidays to emphasize to consumers that the items are readily available and in stock.

“We have a global supply chain and we are not immune to issues,” Berger said. “We’ve had a lot of things related to holiday moving around. But we anticipated a lot of it and have been able to implement fallback plans for various types of marketing campaigns, based on delays.”

According to Wong, many companies fall in one of two camps. Either the retailer has enough products to sell, but might sell out before Black Friday, so it is encouraging shoppers to buy early. Or, the retailer is waiting on goods to arrive, so the business is holding off on marketing blitzes until then.

“We actually have a few clients, unfortunately, where we couldn’t pull the trigger soon enough,” Wong said. “There are actually catalogs going home for some of our clients where half the products are not even available within the catalog.”

Small Businesses In Finance And Insurance Recovered Best From Pandemic

Fri Nov 26 , 2021
In an examination of small business funding trends, the new Biz2Credit Recovery Ranking for 2021 found that businesses in the Financial Services and Insurance industry recovered the fastest from the COVID-19 pandemic compared to other industries. NEW YORK, NY: Closed signs hang on a fast food restaurant amid the coronavirus […] 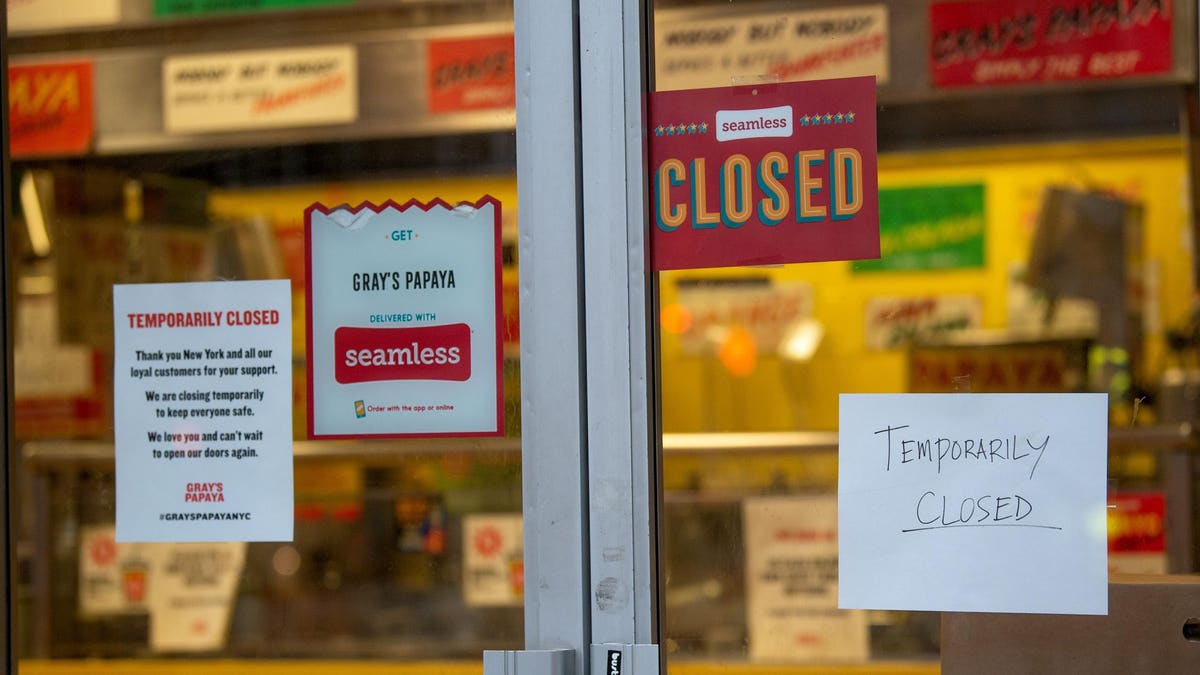 Readers Say “I am so glad to have it back.” A passenger departs a Delta Air Lines plane after arriving at Ronald Reagan National Airport (DCA) in Arlington, Virginia on Jan. 20, 2022. Al Drago/Bloomberg Some employees are trading in their Zoom links for airline tickets. Boston.com recently asked readers […]