Jerome Powell is no actor, but he did a good impression of Clint Eastwood in a speech to business economists Monday.

The Federal Reserve Chairman all but implored them – and the markets – to “Go ahead, make my day” as he promised a vigorous attack on inflation after two years of largely dismissing the threat as “transitory.”

Acknowledging the central bank and the bulk of economists, as well as the Biden administration, had “widely underestimated the severity and persistence of supply-side frictions, which, when combined with strong demand, especially for durable goods, produced surprisingly high inflation,” Powell promised to do whatever it takes to tame the beast.

Powell and his colleagues have already started down that road, with a hike in the federal funds rate of 25 basis points. But, he told the National Association for Business Economics, “if we conclude that it is appropriate to move more aggressively by raising the federal funds rate by more than 25 basis points at a meeting or meetings, we will do so.”

“And if we determine that we need to tighten beyond common measures of neutral and into a more restrictive stance, we will do that as well,” he added.

The goal for Powell and the Fed is to engineer a “soft landing” of the economy that brings prices under control without choking off growth. It is not always an easy task, but Powell turned to history to buttress his argument that it is possible. He starts with a strong hand in that the economy has been performing well and the labor markets have recovered almost all of the losses brought on by the coronavirus pandemic.

But the war in Ukraine has scrambled energy and commodity markets – Russia is a leading player in both – and the coronavirus has not yet been put to rest. Indeed, recent spikes in cases in China and Europe are worrisome.

“I believe that the historical record provides some grounds for optimism: Soft, or at least soft-ish, landings have been relatively common in U.S. monetary history,” Powell said. “In three episodes – in 1965, 1984 and 1994 – the Fed raised the federal funds rate significantly in response to perceived overheating without precipitating a recession.”

“In other cases, recessions chronologically followed the conclusion of a tightening cycle, but the recessions were not apparently due to excessive tightening of monetary policy. For example, the tightening from 2015 to 2019 was followed by the pandemic-induced recession,” Powell added.

The key question is whether consumer spending holds up. After all, it powers nearly 70% of the domestic economy. Actions taken by Congress and the Fed during the pandemic poured trillions into the economy, both through extremely accomodative monetary policy that drove borrowing costs to record lows and direct payments from the government that put thousands of dollars into the pockets of Americans. Spending soared, particularly on items that drove inflation.

Perhaps the biggest curveball, though, was the rise in energy costs. As people returned to their pre-pandemic lives, demand for energy rose way beyond the ability of producers to meet it. The price of a gallon of gas soared, first above $3, then to as high as $4.30 following the Russian invasion of Ukraine. The rise in energy prices drove other costs higher, especially food.

“Russia is one of the world’s largest producers of commodities, and Ukraine is a key producer of several commodities as well, including wheat and neon, which is used in the production of computer chips,” Powell said. “There is no recent experience with significant market disruption across such a broad range of commodities. In addition to the direct effects from higher global oil and commodity prices, the invasion and related events are likely to restrain economic activity abroad and further disrupt supply chains, which would create spillovers to the U.S. economy.”

Economists and Republican politicians point to the early 1980s as the last time the U.S. suffered this level of price increases, now running at close to an 8% annual clip. That battle with inflation did not end well, as then-Chairman Paul Volcker drove interest rates to record levels in the double-digits and the nation endured a nasty recession.

But Powell chose to highlight another era, which also ended badly.

“We might look to the historical experience with oil price shocks in the 1970s – not a happy story,” he said. “Fortunately, the United States is now much better situated to weather oil price shocks. We are now the world’s largest producer of oil, and our economy is significantly less oil intensive than in the 1970s.”

“Today a rise in oil prices has mixed effects on the economy, lowering real household incomes and thus demand, but raising investment in drilling over time and benefiting oil-producing areas more generally. On net, oil shocks tend to weigh on output in the U.S. economy, but by far less than in the 1970s.”

While that was happy talk for economists, Powell may have had another audience in mind as he spoke: the stock and bond markets. Interest rates were already on the rise way ahead of the Fed’s decision to formally raise them last week. And they have risen further with the war in Ukraine and following Powell’s comments Monday.

Stocks did sell off Monday as Powell spoke, ending down 200 points. But Dow Jones Industrial Average futures were in positive territory Tuesday morning ahead of the opening. And since hitting a low on March 8, stocks have actually performed quite well, BCA Research noted Tuesday morning.

“The S&P 500 is up 7% from its March 8 trough, reducing year-to-date losses to 6.4% and bringing gains since the start of the Russian invasion of Ukraine to 5.6%,” BCA wrote in an email to clients.

“The S&P 500 is likely to move higher over a 12-month horizon,” BCA predicts. “True, the Fed is hiking interest rates and the geopolitical situation poses a headwind. However, an eventual stabilization in the situation in Ukraine will shift the drivers of the equity market to underlying macroeconomic conditions. On this front, US households’ excess savings are elevated which will support consumption. Manufacturing activity is resilient. Moreover, interest rates are still relatively low.”

Many economists focus on the yield curve, which is a line tracing interest rates for bonds of equal quality but different time durations. Normally, bonds with a longer time horizon carry higher yields. But when the gap between the two narrows, or even inverts, it suggests investors are more worried about current economic conditions than those in the future.

The two-year Treasury yield has been rising and now sits at 2.185%, resulting in a flattening of the yield curve when measured against the 10-year.

“Many economists don’t think the curve can actually “predict” a recession, but that it reflects economic conditions, and a flat to inverted curve has historically meant a weaker economy that is more prone to recession,” Tim Holland, chief investment advisor at Orion Advisor Solutions, said in an email on Monday.

“The spread between the two is near a five year high of 179 (basis points)” as of Monday. “If the past 30 years is any guide, both parts of the curve need to flatten and invert before we are at risk of recession.”

Absent a sharp deterioration in either market, the current moves are probably what Powell would like to see in response to his aggressive tone. Uncertainties remain, especially with the situation in Ukraine and the resilient coronavirus, but so far the response to the Fed chairman’s new hawkish stance is more Dirty Harry than Paul Volcker.

Mon Mar 28 , 2022
Opinions expressed by Entrepreneur contributors are their own. Effective B2B marketing for SaaS businesses can look much different from brick-and-mortar organizations, but some strategies hold across all fields. SaaS businesses fill a niche by providing necessary subscription services to companies online. Most brands utilize at least one SaaS company, whether […] 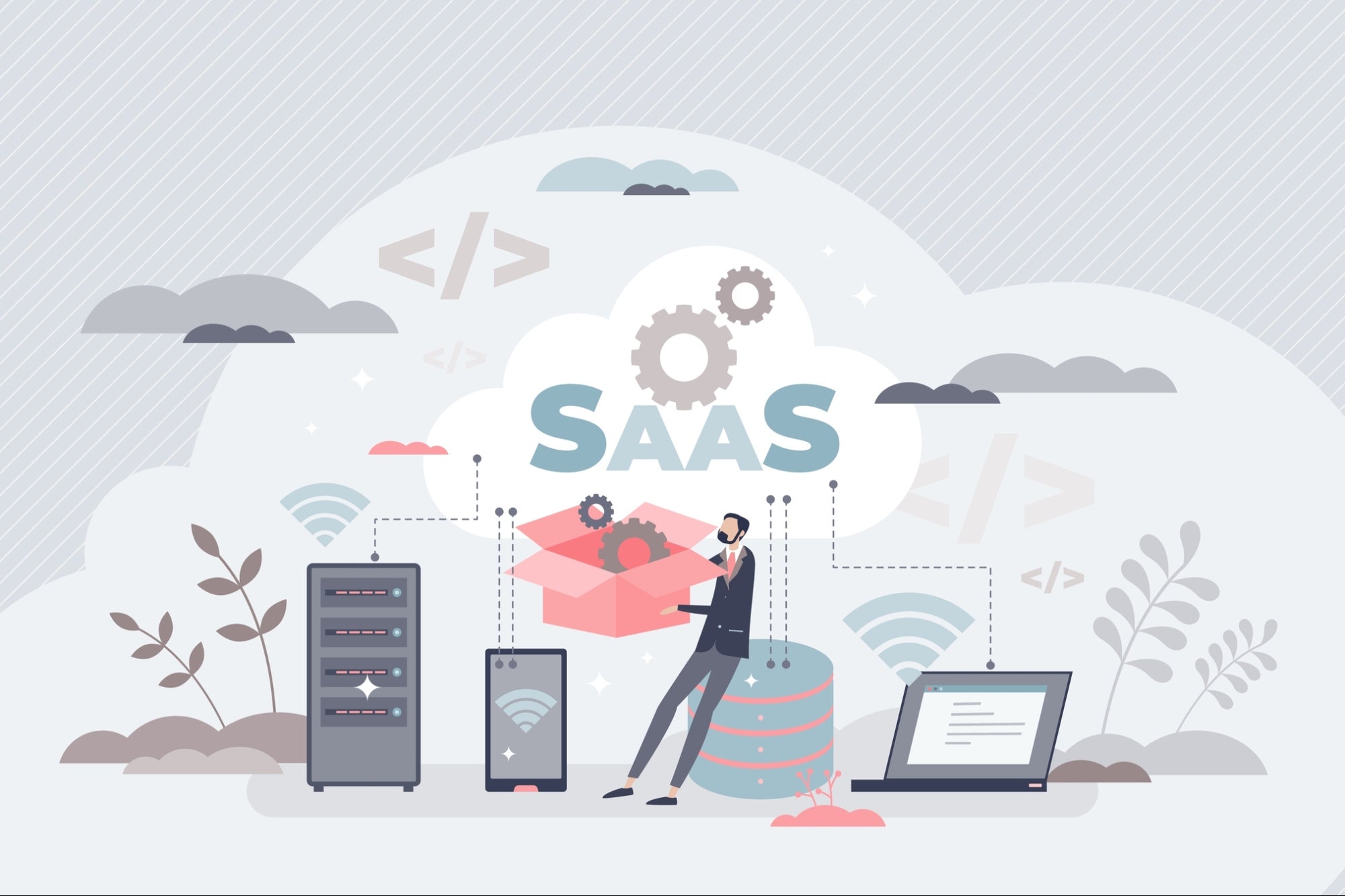