REOPENING PLANS:
Although Taiwan’s COVID-19 infection rate is about the same as among inbound travelers, healthcare capacity is the main factor being considered

The Central Epidemic Command Center (CECC) yesterday said a policy for reopening national borders to business travelers was being discussed with the Ministry of Economic Affairs and “would be announced soon.”

Minister of Health and Welfare Chen Shih-chung (陳時中), who heads the center, said that the COVID-19 infection rate in Taiwan has increased to about 6 percent, which is about the same as the positivity rate detected among inbound travelers.

The tight border control measures imposed since the COVID-19 pandemic began had aimed to keep the virus out, but as the infection rate has increased, stopping the virus at the border is no longer a main concern, he said.

The main concern that would affect border reopening plans for next month would be healthcare capacity, as healthcare providers are still under pressure due to the local outbreak, he said.

As many countries are reopening to restore economic stability, and Taiwan has lost out on many international investment and business opportunities during the pandemic, the policy for reopening to business travelers would be announced soon, he said. 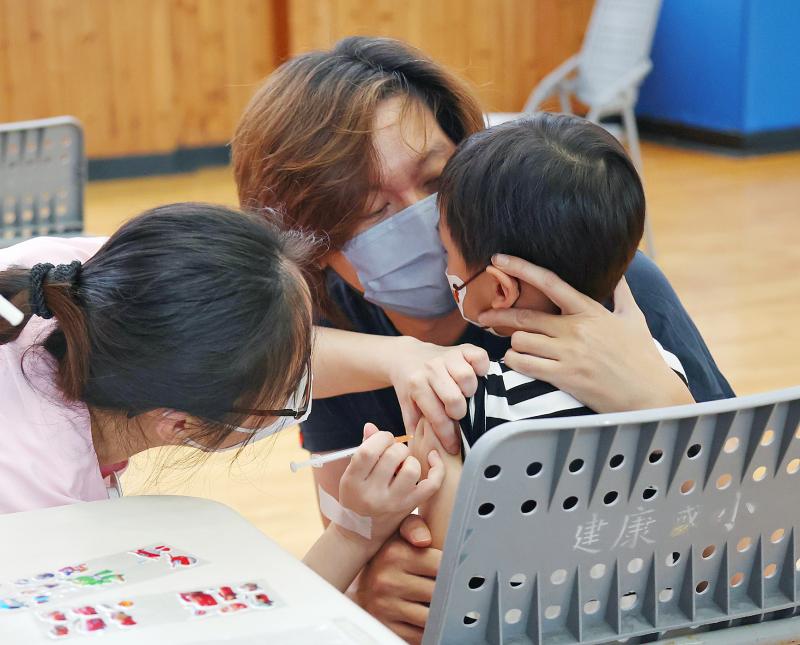 Chen said 10,066 courses of the oral antiviral Paxlovid and 1,351 courses of molnupiravir were prescribed on Friday, a significant increase from previous days.

If about 15 percent of cases are eligible for antivirals, the procured drugs would cover another 5 million confirmed cases, he said.

CDC Deputy Director-General Philip Lo (羅一鈞), deputy head of the CECC’s medical response division, said that 4,439 moderate or severe cases, including 1,058 deaths, have been reported so far this year.

As of Friday, the rate of severe cases had increased to about 0.08 percent, he said.

Of the 127 deaths confirmed yesterday, 119 people had underlying health conditions, 48 were unvaccinated and 74 people did not receive a booster shot, the center’s data showed.

Two young children died, one of whom was a six-year-old boy who was originally suspected of having encephalitis, but was later found to have a malignant tumor in his cerebellum, Lo said, adding that he died of a brain tumor and neurogenic shock.

The other was a five-year-old boy who had a muscular disease and died of pneumonia and respiratory failure, he said.

Pediatric Infectious Diseases Society of Taiwan chairperson Chiu Nan-chang (邱南昌) said there could be four reasons COVID-19 affects the brain, the main one being a “cytokine storm” induced by the virus, which is a hyperactive immune response that can harm the nervous system and organ tissues.

While the reasons are being studied, the most important things people should look out for in children are early signs of severe illness and encephalitis, he said.

Although the rate of severe cases among children with COVID-19 is low, parents should try to keep their children safe and consider getting them vaccinated if they are five or older, because it is hard to predict how they will react to the disease, Chiu said.

Comments will be moderated. Keep comments relevant to the article. Remarks containing abusive and obscene language, personal attacks of any kind or promotion will be removed and the user banned. Final decision will be at the discretion of the Taipei Times.

Should You Be Adding Ryerson Holding (NYSE:RYI) To Your Watchlist Today?